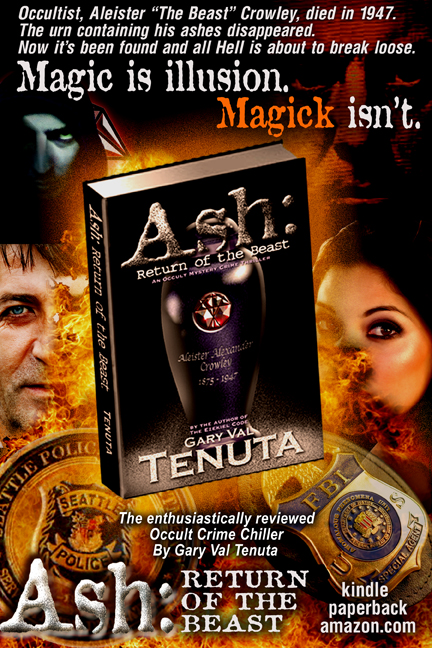 You might have heard about the notorious occultist, Aleister "THE BEAST" Crowley. You might know that the British press called him "The Wickedest Man In The World". You might know his favorite number was 666. You might know that he died in 1947 and that his body was cremated. You might even know that the urn containing his ashes mysteriously disappeared. But… what you didn't know is that the missing urn was recently discovered by the leader of a Seattle-based death-metal band. And now, as the great Ray Bradbury would say, something wicked this way comes. Oh, yes. Indeed it does. Seattle's clergymen are mysteriously dying––one at a time––exactly 9 days apart. It's the most bizarre case that has ever landed smack dab on the desk of Seattle Police Detective, Brian Kane.

Fortunately, Rowena Ravenwood––an occult specialist with the FBI––has been assigned to help Kane unravel this chilling chain of events as the survival of the entire human race hangs precariously in the balance.


Unfortunately, the clues to help solve the case are in desperately short supply. Worse yet, so is the amount of time they have to stop the madness before all Hell breaks loose. And – according to Special Agent Ravenwood – that’s not just a figure of speech.

ASH: RETURN OF THE BEAST
99¢ for a limited time!

"Rivals the best I've ever read by Stephen King, Peter Straub, or Dean Koontz. Hell, Clive Barker would be proud of this one. Yes, it's that good." - Jeff Whelan

"It threw me for a literary loop, and I could NOT put this baby down!. The characters are very realistic... the plot is amazing. The twists in this story were terrific." - J. Wall, photographer

"Brilliantly conceived and executed. I couldn't put it down." - Rai Aren, author of Secret Of The Sands

“The writing was flawless, and the plot was so clever and enticing, that I would definitely recommend this book to anyone who enjoys occult mysteries. A riveting story.” – Sandra Carrington-Smith

"A page turner... dragging you into a world where few authors have successfully gone... to the Gates of Hell and back! The thrill ride alone is worth the purchase." - Valerie Bowen, author of the Mind of a Madman series

"Wow...Dan Brown fans watch out! It's gripping, tantalizing... I was hooked by the end of the first chapter and literally unwilling to put it down!" - Nikki, book blogger at Close Encounters With The Night Kind

“I wasn't so much reading the book as being sucked into the story with very little effort and seeing the story unfold in my mind through spectacular imagery...” – Michelle Parkins, South Africa

"A good break after all the boy-meets-girl plots. Good writing... interesting concepts... a riddle and some clues to solve... I was reminded of Dennis Lehane. Very different from other horror fiction stories... even gave the whole Necronomicon tale a new spin." - Cyma R. Kahn, goodreads.com reviewer

"Filled with magick... at times drawing one into the evil." - Ellen In Atlanta, amazon.com reviewer

"Plenty of atmosphere and a compelling narrative. A worthwhile roller-coaster ride." - Bob Freeman, author of The Descendant

"What a great story – fast paced and exciting, right to the end." - Roxanne Bland, Of Werewolves And Other Strangers

"If you are a fan of Stephen King, you would like this occult thriller. It's not quite explainable and you can't tear yourself away." - John C. Stipa, Virginia

“The narrative takes a different approach to the run-of-the-mill Satanist storyline.The action builds nicely and we are drawn into the web of evil and dark revelations as the story progresses.The narrative is rich with details on magic, mystical cycles, and ancient gods and goddesses.” – Drake Morgan at Horror Novel Reviews

"Although this is fiction it makes you wonder whether there is some truth behind the whole story. Who knows? Suggest that you read it with an open mind. A real page turner." – Anthony Cessar, Gudja, Malta
•••••

Reader discretion is advised: This book is intended for adult readers due to strong language and some implied sexual content of a deviant nature. Note: the sexual content is implied as opposed to graphic. It is not included as a gratuitous element. Rather, it is critical to the background of one of the primary characters, his personal development and the motivation driving his future behavior.