Deroid’s menacing voice boomed across the Star Stormer hanger. “Unless you’ve decided to stop for lunch, I suggest you board the stealth ship, now!”
The CCSC cyborg had materialised in front of them, his face and skin suit splattered with Periss-3, holding the head of a sytoid by its scalp. Deroid had managed to kill yet another of the Synth/Bio monstrosities.
And it had felt good, so very good.
He could have rescued Eirini and escaped with her from this pitiful rock but that would have meant the deaths of Piap, Marcio, Calibra and Forster.
The sytoids had spared their lives because he’d allowed Eirini to be taken. Besides, his ethical inhibitor had prevented him from sacrificing them, deducing that his overall mission parameters would be hampered if they were lost this early into the mission objectives.
By allowing Eirini to be taken by the sytoids, Deroid knew that he had not only kept them all alive but Eirini would lead them directly to Bacvor. And he wanted to kill Bacvor more than anything. While Bacvor screamed for his life he would rip his beating heart from his chest before stuffing the organ into Bacvor’s mouth, to choke on it with his last dying breaths.
“They’re coming!” he screeched hideously, tossing the head of the sytoid over their heads. “Faction commandos will be flooding the hanger in just a few seconds. Go now!”
A moment later the hanger portal behind Deroid swirled ominously and opened, followed by a black tide of combat suited figures who hurtled into the hanger with their power suits on maximum, an array of pulse weaponry on display.
Deroid watched as Piap, Marcio, Calibra and Forster sprinted for the Gracious Lady.
About fucking time, the cyborg thought, amused.
The Faction commandos opened fire with rifles, carbines and darts but Deroid was ready for them. He’d already created a powerful elliptical force field that extended just beyond the range of the ECDS Special Operations stealth ship, Gracious Lady. The maelstrom of particle beam fire and pulse darts instantaneously slammed into the force field in another dazzling display of colour.
Deroid roared with insane laughter as he watched the portal open on the stealth ship to quickly swallow up Piap, Marcio, Calibra and Forster. Deroid did not miss Marcio’s wave of gratitude before she vanished through the portal. He doubted the gesture’s sincerity.
Bitch.
His laughter finally subdued.
“Oh, this is going to be so much fun!” he thundered, raising his giant fists into the air while the force field prevented his obliteration.
He watched as the Gracious Lady gently lifted from the hanger bay floor and, with a bright pulse of blue light from the rear of the ship, was gone.
Deroid slowly turned to face the Faction commandos, the barrage of weapons fire now fully focused on him. It was like a tornado, a whirlpool of plasma in front of his eyes, threatening to swallow him up.
It was draining his skin suit’s power supply and limiting his ability to return fire.
He grinned defiantly.
He wasn’t worried.
The Faction commandos were all going to die. 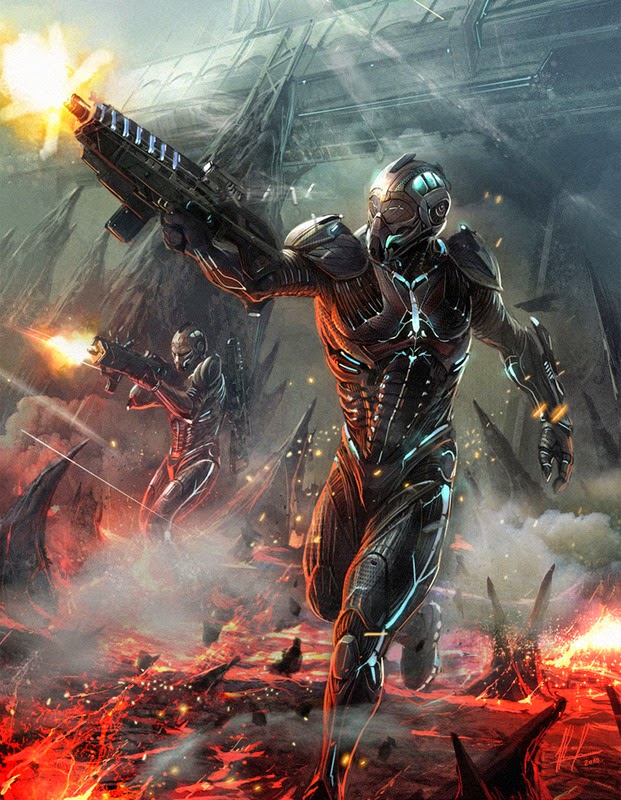