Deep thoughts about the self and self-improvement…

Even a quick look at the self-help shelf at any bookstore will quickly reveal that the industry is booming and that most of us seem to have a secret desire to ‘be a better person’.  We search for that magic formula which will give us enlightenment, hopefully the quicker the better.  But is enlightenment, as we understand it, really achievable?  If we did have a better life what would it be like?  Would it be very different from our current life?  Even more, what if we found that this ‘self’, which we are so bent on improving, turned out not to really exist, to be a myth, an unreliable creation of our own brain?  Can modern neuroscience throw any light on this subject, and if so do you have to be an expert to understand it?  If you are confused already get ready to have many of your ideas challenged by Chris Niebauer’s thought provoking book The Neurotics Guide To Avoiding Enlightenment: How The Left-brain Plays Unending Games Of Self-improvement. 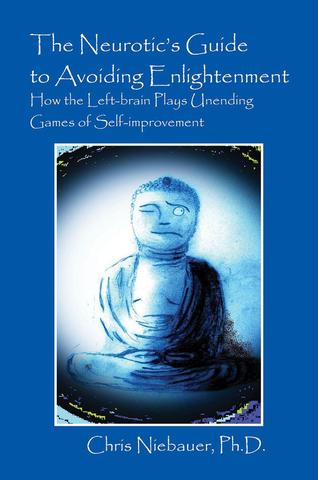 Many self-help books are written from a New Age / Eastern Mysticism perspective and in a way Niebauer’s book fits into this category.  Niebauer is strongly influenced both by the mid twentieth century author Alan Watts and the contemporary writer Eckhart Tolle.  Watts wrote on a variety of Eastern Religions including Zen, Hinduism and Taoism and Tolle is greatly influenced by Buddhism.  To describe the book as being purely of this ilk, however, would be greatly misleading.  Also, to describe The Neurotics Guide simply as a self-help book, would be equally deceptive.  Certainly there are mind-exercises and meditation techniques included which the reader may find helps them achieve a new mind-state, and which gives them a new approach to life, but this is very much a book of theory / philosophy which concentrates on challenging our standard ideas about ourselves and our lives.  Niebauer is indeed “a college professor specializing in cognitive neuropsychology” (Preface) and the book has a heavy neuroscience content.  In essence Niebauer is attempting to give Eastern Mysticism a neuroscience framework, taking it from the world of pure ideas and giving it a firm background in science.

As the reader may by now be guessing this is not really a beginner’s book.  Some understanding of both Eastern Mysticism and psychology would be useful.  Niebauer’s ideas are unorthodox and very challenging, and need to be thought about quite a bit.  The first chapter, for example, may be a struggle to understand, but Niebauer’s ideas become easier to appreciate if you stay with the book and keep reading.  By the end you may not agree with everything Niebauer says, but you will certainly have been forced to think through much of what you believe about yourself and the world.

Despite the emphasis on theory, the book does not use technical terms or give lengthy, in depth scientific discussions.  There are illustrative examples from Niebauer’s real life and that of his family.  These examples help to make the text more personal and easier for the average reader to relate to.

As the subtitle suggests a great deal of this book has to do with the left-brain.  This is the hemisphere which is dominant, that is, which is most prominent in our thinking.  It is pattern seeking and sees the world in terms of categories.  It divides the world into nouns, that is stable ‘things’.  All this is fine except that much of the world is process, which is to say that things change, indeed often are in considerable flux.  Thus we tend to think of ourselves as a permanent ‘picture’.  We tell stories from our history which illustrate ’who we are’, when in fact we are a changing entity.  This idea is very much in agreement with narrative psychology (Dan P. McAdams. The Stories We Live By: Personal Myths And The Making Of The Self:__ New York: The Guilford Press, c1993).  Taking another example, we tend to see enlightenment as a ‘thing’ which can be achieved, a permanent state in which our old self ends and a new self comes.  That is we see enlightenment as the ceasing of one stable thing and the beginning of another.  As Niebauer points out our left-brain will never cease operating, even if we become much more aware of our right-brain, process oriented, expanded awareness, therefore enlightenment is a continuing process of change, of seeing the world in a new way.

Much of the book centers on the discovery that, in the absence of solid data, the left brain confabulates, that is, invents perfectly reasonable sounding, yet untrue, explanations for why the world appears as it does.  That is when we have little information we see ‘patterns’ which don’t exist, at least not in the way we believe they do.  This discovery comes from split brain patients.  These are people who, usually because they suffer from extreme epilepsy, have had their corpus callosum cut.  The corpus callosum allows the left and right hemispheres to communicate.  It does not take much to remember an occasion in which we have ‘jumped to conclusions’.  At the time we are sure of our ideas, but later we come to doubt because we find information otherwise or because we see that we actually have no evidence.  The end result of these findings is of course that we should be much less certain of ourselves.  This is an idea Alan W. Watts proposes in his book The Wisdom Of Insecurity (New York: Vintage Books, c1951).

Niebauer proposes two main solutions to our problems in life.  The first is that we be aware of life, observing ourselves, and the things that happen to us, from a distance.  This allows us to truly observe, rather than jump to conclusions.  It also allows us to distance ourselves from the emotional drama of our lives.  We observe “I am upset’, but by the act of extended observation we are one step from our unsettledness.  This of course is what is known in Buddhism as mindfulness.  Niebauer’s second solution is to approach life with a playful attitude.  We take ourselves less seriously and do not know with the certainty which our left brain wants to assure us that we have.  Once again we are distanced from the drama of life.

Of course the three paragraphs above only just touch on the topics discussed in Niebauer’s book which range from as specific and real as what can be done about anxiety, to as broad and esoteric as what part of the self survives after death.  While the book is not long there is much in it, and the reader may prefer to only read one chapter a day in order to give the author due consideration.

One point of criticism is that all of Niebauer’s evidence comes from brain damaged patients and optical illusions.  These are not circumstances in which the ‘normal’ aspects of life apply.   This leads us to wonder how much these circumstances occur in ‘ordinary’ life.  It is not that we doubt what Niebauers is saying, but we wonder how often the circumstances occur.  How often do we, for example, jump to conclusions?  Niebauer would have it that we do this frequently, but is that so.  A little more evidence on this point would be useful.  But even if we disagree on the frequency Niebauer’s book is still certainly an eye opener.

The Neurotics Guide To Avoiding Enlightenment is certainly a book that will challenge most readers and give them much to think about.  We all tend to be reasonably certain that we ‘know ourselves’ and understand the world, but Chris Niebauer definitely makes us wonder just how much we really do.  Niebauer doubts that we can ever fully escape ourselves and become ‘enlightened’ as we so desire, but he does hold that we can be more aware.  If you are interested in Eastern Philosophy you will certainly find this book different from most on that subject which you own.  If you are interested in knowing more about how the brain works you will also be intrigued by this volume.  I am happy to rate this book as four stars out of five. 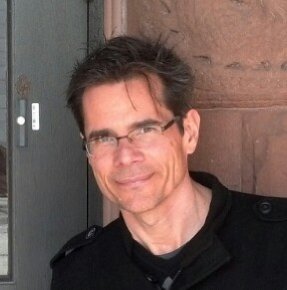